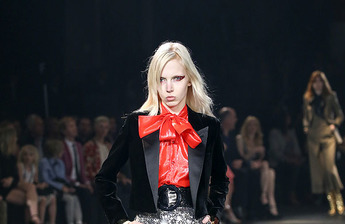 It took more than three years and several high-profile dramas, but at the fabled Palladium concert hall in Los Angeles last night, Hedi Slimane sent out the Saint Laurent collection many have been waiting for, a redefinition of Gallic chic for the rock/hip-hop/Instagram generation — and it was fabulous.

Where Slimane often reproduced L.A. for Paris, now he did Paris for L.A. Indeed, while his Saint Laurent shows often looked like literal interpretations of vintage rock gear, this time around he delved into the archives of Saint Laurent, in celebration of the 50th anniversary of the Rive Gauche line.

The collection produced scalpel-cut tuxedos and three-piece suits for men, at times dandified with fedoras, pussy bows, and the occasional flourish of a fur coat. Regimental garb surfaced in the shape of Napoleon or Sergeant Pepper jackets. Throughout the show, jeans were worn high on the waist and cinched.

The women’s silhouette (the pre-fall line) consisted of a nifty cropped jacket, sometimes worn with a pussy-bow top, with mid-length culottes and high boots. The deluxe fabrics included velvet, fur, leather, and embroidered chiffon. As the models crisscrossed the vast runway, many pieces stood out, including a black sequined dress with a white ruff round the neckline, a red-velvet cape trimmed with gold threads, and a black tuxedo jacket elongated into a coat. So sumptuous was the Parisian sophistication that you could almost smell the pungent notes of Opium, the house’s star fragrance.

The press release defined the collection as unisex, and the many embroidered men’s items reminded us of how far menswear has come, partly due to Slimane’s fashion revolution of the 1990s. For the show was actually meant as a compendium of Slimane’s journey in the fashion world, from his androgynous silhouettes at Saint Laurent almost two decades ago to his 2005 rocker-chic collection for Dior Homme — which, with its pussy bows, hats, capes, and glam-rock make-up, sowed the seeds for later collections, like this one.

Besides its high aesthetic quality, the show took on a certain importance, as it tackled many important topics in the fashion industry. Slimane’s decision to move his show to Los Angeles comes at a time when several designers no longer believe in the current long-lead show system, and are trying to do things their own way. The event, attended by countless celebrities, comes at a time of intense speculation about the designer’s future at the house. Also in attendance, the label’s top brass François-Henri Pinault told WWD, “We’re discussing, we have till the end of March, no rush.” Hmmm.