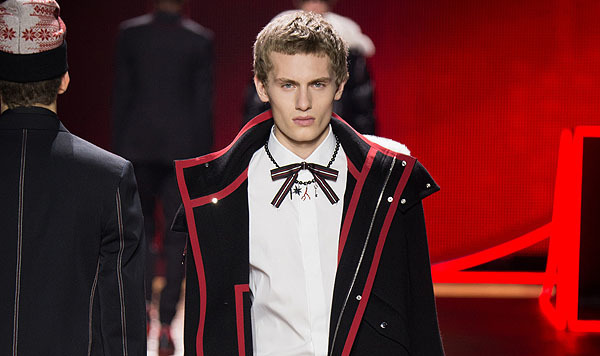 On the ceiling hung a mammoth chandelier while the runway was laid out like a skate park, although a grit-less, neon-brimmed version. The setting of Dior’s latest men’s show epitomized Kris Van Assche’s vision for the house, where he’s been ensconced for almost ten years. His man has an interest in young obsessions — music, sports — but he is a bourgeois classicist to the core. So he might hang in a battered skate park, but he will always end back in their cozy 16th-arrondissement apartments.

This formula isn’t about drawing you into unknown territory, or defying fashion conventions, although the designer asked himself a very interesting question this season: How does an individual’s past grow and morph into his present without nostalgia? His answer was this mix of men’s classics and teenage recreation — and the result was quite endearing. The show opened with neat slim suits pepped up by quirky accessories, like thin rope belts and bow-ties, thick-soled mountain shoes, beanies-cum-caps, not to mention black nail polish and quirky hairdos. The collection then moved to other easily covetable items like mountain sweaters.

The palette consisted of black, white, and red, and the star patterns included flowers (culled from the house’s archives) and checks, appearing as a chessboard pattern, tartan, or traced with hanging threads. Outerwear is strong almost everywhere this season, and Van Assche added his contribution with a black down jacket with a white fur hood.