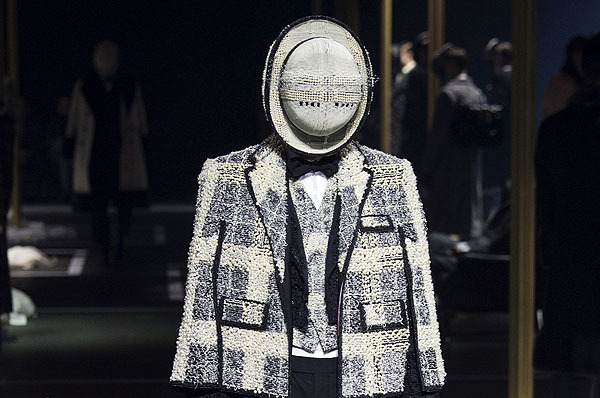 With Hedi Slimane’s decision to stage his Saint Laurent show in Los Angeles next month, Thom Browne was given the last word on a fashion week that produced several fine collections (wonderful outerwear and exquisite accessories) and an arresting, no-photos-allowed performance by Hood By Air (more on that later). Browne wrapped up the week beautifully, cementing his abiding love of formal wear, and convincingly updating it with disintegrating effects.

Of course, going to a Thom Browne show is tantamount to attending a mini-play, and this season his Dorian Gray-ish plot involved two sinister, white-powdered men removing wrapping paper from huge frames placed around the runway, and also a huge chandelier. They then stolidly sat face-to-face on two armchairs.

The models then came out, wearing exquisitely tattered versions of Browne’s iconic gray suits. Most of the outfits were torn, ripped at the seams, or had threads hanging from unraveling fabrics. Among the standouts were coats with an intricate lattice of fur, or their suiting morphing into knitwear.

Even the capacious black suitcases were given the tattered treatment, when the models weren’t carrying realistic versions of dog-shaped bags — a continuation of the designer’s infatuation with fauna luggage. The models’ faces were entirely hidden by bowler hats pierced with tiny holes, surely the fanciest fencing hats ever.

By the time the Beatles’ poetic ‘Because’ filled the room, the models had positioned themselves in front of the frames. On one side stood a model in the outfit’s impeccable version, and on the other side stood two models tricked-out in the attic versions. Now do you get the Dorian theme?

There was an unmistakable beauty in the clothes’ faded grandeur, and the craftsmanship was flabbergasting. Sure, designers like Comme des Garçons have exalted distressed clothes for some time, but with this show Thom Browne ventured into uncharted territory, and the clothes ended up looking particularly youthful. I couldn’t help imagining them worn with old jeans and Nikes. 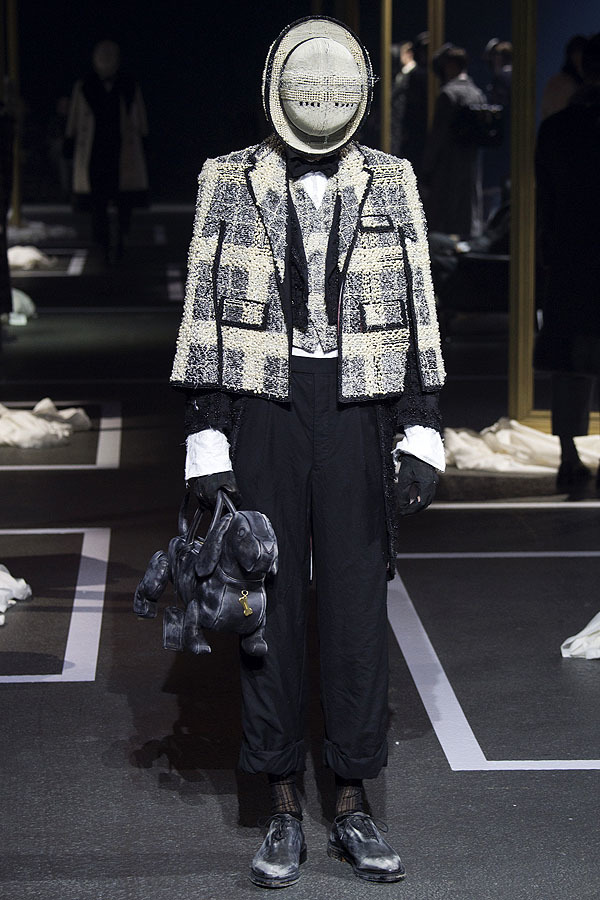